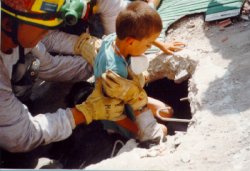 The Task Force has extensive international (USAR Team 1) and domestic (Virginia Task Force 1) disaster response experience. It is also recognized throughout the United States and the world, as a premier leader in the provision of training in catastrophic event mitigation, readiness, and response and recovery techniques.

The Department realizes the importance of supporting the Task Force in its mission of delivering capacity assessments, mitigation planning, and readiness training throughout the world. By assisting in the development and enhancement of other search and rescue resources, the Task Force lessens the probability and necessity of it being deployed.

The Task Force began its humanitarian response relationship with the US Agency for International Development - Office of US Foreign Disaster Assistance (USAID-OFDA) in 1986 following a tragic 1985 seismic event in Mexico City. Realizing the void of qualified search and rescue resources in the Americas Region, USAID-OFDA joined in a strategic partnership with Fairfax County and the Miami-Dade Fire and Rescue Departments to develop a self-sustainable response resource. Its first deployment was to the former Soviet Armenia in 1988 in the aftermath of a large earthquake.

As the threats related to the Cold War began to diminish in the early 1990's, the Federal Emergency Management Agency (FEMA) transitioned its strategic planning initiatives from those of Civil Defense to concepts similar to those begun by USAID-OFDA; domestic mitigation, response, and recovery. When FEMA announced plans to develop a domestic National US&R Response System, Fairfax County was one of the original respondents. Accepted into the domestic system in 1991, the resource was then deemed "operational" by both FEMA and USAID-OFDA. The Task Force is proud to be one of only 28 domestic resources qualified by FEMA to assist with Homeland Security, and one of two resources utilized by USAID for international response. 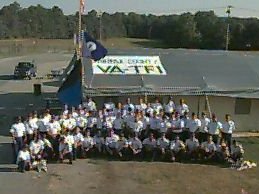 In total, there are approximately 200 trained and equipped-members on the Task Force. When activated, the Task Force is comprised of 70 persons that consists of firefighters and paramedics from the Fairfax County Fire & Rescue Department (both career and volunteer) and highly trained civilians including physicians, canine handlers, structural engineers, communications experts and heavy rigging specialists. When activated by either federal partner, all related expenses are fully reimbursed by either, resulting in no cost to the citizens of Fairfax County, Virginia.

Task Force members are required to attend functional training on a monthly basis to maintain their skills, often without compensation. The members agree that this is a small personal cost and well-worth the investment of being a part of this talented response resource. The Task Force conducts two "Full Team" exercise (one classroom and the other a 72-hour field exercise) each year.

Since 1986, Task Force members have been at the forefront in assisting in the development of response systems both domestically and internationally. This assistance and support, supplied to USAID, the United Nations (UN), and FEMA, continues today to ensure that the world's first responder community remains prepared for its arduous duty.

The Task Force realizes that it takes many partnerships to ensure a successful venture. It speaks often of its relationship with USAID and FEMA, as well as its evolving initiatives with the UN. The members fully realize that the most important partnerships are with their families and their co-workers. Deployed without warning, often in the dark of night, the members need to be ensured that they and their family can accept the restrictions of a 14-day mission, often without communications home. The members also realize the importance of their co-workers, who will be required to work extra shifts while the Task Force is away. The Task Force could not be successful without this strong support and assistance.